Which is worse, cancer or depression? The answer is clear. Depression is worse: depression makes you want to die and cancer doesn’t.

I’ve spent all my adult life with depression lurking. I haven’t mentioned it to very many people at all.  For the first ten years I talked about it to nobody at all, for the next decade only Gill and therapists. I have not wanted to be dismissed as a weak and worthless person.  But I have been hugely comforted when other people have talked about depression so this blog is me trying to give back. I was inspired by the Norwegian Prime Minister – Prime minister! – who announced in 1998 that he was ill with depression and needed to take some time off, which he did and then returned to complete a successful term in office.

My depression has taken cyclical form with a nine month bout every three years. I worked this out in the late 1990s. It was then possible to start seeing it as a medical issue rather than a personal failing. Then I talked to Gill, saw my GP and started exploring drug and other treatments (I had already tried counseling methods without fully acknowledging that I was ill).

My experience of depression was debilitating, with me being incapable of making any good decisions or getting anything done or caring for other people or even looking after myself, with no glimmer of appetite or joy in life. Thoughts of death rolled and crashed and banged around the door. I spent hours concocting methods of ending my life and discarding them, concocting and discarding, concocting and discarding.  Since having children, they have always been, in the end, a definitive reason for discarding.

My depression followed a ‘slowly in, quickly out’ pattern. Over the summer I would start feeling gloomy more and more often and this continued through autumn to blackest days of winter. Some time in spring the first the echo of something I scarcely dared hope for or believe in opened up just for a moment. Once it happened on a bike ride in playing fields in Cambridge; once in the cricket field in front of Firle House, a beautiful Sussex country house, on a day with picnic, children’s games, and our family playing with two others.

One surprising fact for me was that people didn’t notice! I continued turning up at work (never high pressure jobs) and nobody shouted at me for not getting the job done or giving a poor lecture. In home life, Gill and others might not have found me exhilarating company but always invited me along and I usually tagged along, with no true enthusiasm but aware that staying at home would probably be worse. Perhaps they did notice but were just too polite to say. But maybe that is just a very English interpretation!

In the 1990s and 2000s I had two bouts of depression truncated by Prozac type drugs, and then a few months after the depression ended I stopped the drugs, but then the depression came back roughly on schedule.  So in 2009 I decided I should be on a drug that was working for me, venlafaxine, for the long term.

After five years depression free, I wanted to see if I’d escaped the cycle and was depression-free without drugs. I didn’t take doctor’s advice. I came off the drugs and within three months the first intimations of gloom appeared. I went back on the drugs but they didn’t help. By last summer I was back in the grips of depression. Also last summer my stomach started hurting persistently which I interpreted as a symptom of the depression, or vice versa. I had a first series of medical check ups in September 2014 but there was no evidence of cancer. It seemed at the time that irritable bowel syndrome was the most likely analysis although it didn’t account for the level or consistency of the stomach pain.

The second set of check ups at the beginning of November included a CT scan and blood tests and it was then that the doctors diagnosed cancer.

And at that point the depression disappeared! Simply evaporated! Was no longer! Apart from terrifying moments in the middle of two dystopian waking dreams following the start of my second chemo a couple of weeks ago, it has not been back (touch wood, fingers crossed).

Depression detached me from the usual trade offs in life: with no appetite for anything, all my choices to do things felt sham. Cancer has returned me to a place where I can take decisions between pleasure and pain, good and bad, in an ordinary way. It has made me more normal and connected with other people. While having cancer I’ve had lots of enjoyable times (like now lazing in a hot deep bath, dictating to Gill in a thoroughly stately manner). 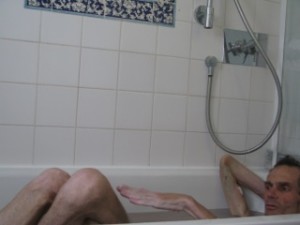 The trade-off is, I die.

I can’t guarantee that I will read anything you write in response because I might die first. But my priority will be to read blog comments (use the button bottom right which appears when you mouse over it). If you want to keep your comment private please send it by email, though I will only read that as second priority.

If you have pictures to attach that would be great, and it would be best if you could attach them to a comment.

Until recently, if you posted a comment, you would not get an alert if there was a response to that comment – so it wasn’t a viable way for me to respond to you.  We think we have fixed that now, though if you don’t get an alert, please let support@sketchengine.co.uk know.

79 thoughts on “Cancer and depression”